Problems of Redressal of Citizens Grievances was the subject on which the Administrative Reforms Commission headed by Late Shri. Morarji Desai, who later became the Prime Minister of India gave its first report. It is that report which recommended for the establishment of Lokpal and Lokayukta institutions at the Central and State level respectively for redressal of citizens grievances by investigating into administrative actions taken by or on behalf of Central Government or State Government or certain public authorities. These institutions were intended to serve as institutions independent of the Government concerned and as institutions to supplement the judicial institutions headed by Chief Justices or Judges of Supreme Court of India or High Court of the State.

The recommendation for appointment of Lokayuktas at the States level, as indicated in that report, was made to improve the standards of Public Administration, by looking into complaints against administrative actions, including cases of corruption, favouritism and official indiscipline in administrative machinery. It is the said recommendation which made the Karnataka State Legislature to enact the Karnataka Lokayukta Act 1984 for investigating into allegations or grievances in respect of administrative actions relatable to matters specified in List II or List III of the 7th Schedule to the Constitution of India.

The Act provides for the appointment of a Lokayukta and one or more Upalokayuktas to investigate and report on allegations or grievances relating to the conduct of public servants.The public servants who are covered by the Act include :-
(1) Chief Minister;
(2) all other Ministers and Members of the State Legislature;
(3) all officers of the State Government;
(4) Chairman, Vice Chairman of local authorities, Statutory bodies or Corporations established by or under any law of the State Legislature, including Co-operative Societies;
(5) Persons in the service of Local Authorities, Corporations owned or controlled by the State Government, a company in which not less than 50% of the shares are held by the State Government, Societies registered under the State Registration Act, Co-operative Societies and Universities established by or under any law of the Legislature.

Where, after investigation into the complaint, the Lokayukta or an Upalokayukta as the case may be considers that the allegation against a public servant is prima facie true and makes a declaration that the post held by him, and the declaration is accepted by the competent authority, the public servant concerned, if he is a Chief Minister or any other Minister or Member of State Legislature shall resign his office and if he is any other non-official shall be deemed to have vacated his office, and, if an official, shall be deemed to have been kept under suspension, with effect from the date of the acceptance of the declaration.

In the case of C. Rangaswamaiah and others Vs. Karnataka Lokayukta and others (1998) 6 SCC 66, the Hon’ble Supreme Court has observed that, the independence of the institution of Lokayukta and its effective functioning are the matters of utmost importance. In the case of Institution of A.P. Lokayukta/Upalokayukta Vs. T. Ramasubba Reddy (1997) 9 SCC 42, the Hon’ble Supreme Court has observed that, when the institution of Lokayukta is headed by high judicial dignitaries, such authorities should be armed with appropriate powers so that their orders and opinions do not become mere paper directions. The Hon’ble High Court of Karnataka in the case of Sri. J.P. Prakash Vs. The State of Karnataka and another (WP No. 5361/2016 (S-KAT) dated 06-04-2016 (DB) observed that when the Lokayukta or Upalokayukta has recommended for initiation of enquiry under Section 12(3) of Karnataka Lokayukta Act, the government cannot go behind the recommendation unless it is set aside by the competent court or only in exceptional circumstances and on a very strong ground. In the case of The Hon’ble Lokayukta and another V/s. Sri. Prakash T.V. and others (W.P. No. 29212/2017 (S-KAT) C/W W.P. No. 29213/2017 and 38938/2018 (S-KAT) dated 29-06-2021, the Division Bench of Hon’ble High Court of Karnataka has held that the institution of Karnataka Lokayukta being a statutory body constituted to curb the menace of corruption, has an institutional interest and as well as the locus to challenge the order passed by Karnataka State Administrative Tribunal in the matters dealt by it.

The Act enables a person aggrieved by the conduct of a public servant or in case of maladministration, corruption, misconduct or official indiscipline, a complaint may be filed before this institution in the prescribed format. Such complaints will be investigated and if the Lokayukta or an Upalokayukta is satisfied that such action of the public servant has resulted in injustice or caused undue hardship to the complainant or to any other person a recommendation will be made to the Competent Authority concerned for the redressal of the grievance and also for taking appropriate action against the public servant who has committed such misconduct. The Act also provides for referring the cases to Lokayukta or an Upalokayukta for investigation by the Government.

Institution of Karnataka Lokayukta consists of Enquiry Wing, Technical Audit Cell and Police Wing. The Enquiry Wing consists of Judicial officers and Prosecutors/Presenting Officers. The Technical Audit Cell consists of Engineers and Auditors who conduct investigation referred to them by Lokayukta/Upalokayuktas in the matters which require expert examination such as allegations of execution of substandard works by the public servants, misappropriation of money etc. The Police Wing deals with the cases registered under the Prevention of Corruption Act-1988. It also assists the Lokayukta/Upalokayuktas in conducting investigation into the complaints registered under the provisions of the Karnataka Lokayukta Act, 1984 as and when referred to it by the Lokayukta/Upalokayuktas.

Apart from the above, in terms of the orders passed by the Lokayukta from time to time the police officers visit the various Government offices to redress the grievance of the general public. The Police Wing is also empowered by Hon’ble Lokayukta to visit the Taluka places and receive the petition/complaint from the general public so that remedial steps are taken to redress the grievances.In the notification of the Government dated 14-03-2016, the Government has formed Anti Corruption Bureau to register and investigate the cases under Prevention of Corruption Act, 1988. The same is challenged before the Hon’ble High Court in W.P. No. 19386/2016 and in the interim order passed by the Hon’ble High Court on 07-04-2016, the Hon’ble High Court has directed that, the cases pending for investigation at the Police Wing of Karnataka Lokayukta should not be transferred to the newly formed Anti Corruption Bureau and shall be continued with the Karnataka Lokayukta. In the same writ petition in an interlocutory application filed by the Institution of the Lokayukta, the Hon’ble High Court in its order dated 12.02.2021 has directed the Anti Corruption Bureau to forward the copies of all the charge sheets filed by it before various courts for the offences punishable under Prevention of Corruption Act to the Registrar, Karnataka Lokayukta for being placed before the Lokayukta or Upa-lokayukta as the case may be for initiating necessary disciplinary proceedings against such delinquent employees. As per the said order, the copies of the charge sheets filed by the Anti Corruption Bureau are forwarded to this institution and Lokayukta or Upalokayukta as the case may be are taking up the investigation and forwarding the appropriate recommendations if it is called for.

In addition to the powers and functions invested under the provisions of Karnataka Lokayukta Act, 1984, the institution is also conducting disciplinary enquiries in respect of cases entrusted to it by the Competent Authority under Rule 14-A of the Karnataka Civil Services (classification, control and appeal) Rules, 1957 and after completion of enquiry the findings of the enquiry officers and the recommendation of the Lokayukta or the Upalokayukta as the case may be are sent to the Government for taking necessary action.

The statistics and the other details relating to the institution and disposal of the cases are uploaded in this website.

Despite our best efforts, we do not guarantee that the documents in this site are free from infection by computer viruses etc. Karnataka Lokayukta nor Government of India, Ministry of Information Technology, National Informatics Centre makes no warranty that the contents of the Site are free from infection by viruses or anything else which has contaminating or destructive properties.

The links are provided to other external sites in some documents. We are not responsible for the accuracy of the contents in those sites. The hyperlinks given to external sites do not constitute an endorsement of information, products or services offered by these sites.

We welcome your suggestions to improve our site and request that any error found may kindly be brought to our notice. please e-mail at : kla-reg[at]nic[dot]in

Thanks for visiting our site.

We are committed to ensure that the Official Website of Karnataka Lokayukta is accessible to all users irrespective of device in use, technology or ability. It has been built, with an aim, to provide maximum accessibility and usability to its visitors.

We have put in our best efforts to ensure that all information on this website is accessible to people with disabilities. For example, a user with visual disability can access this Portal using assistive technologies, such as screen readers and magnifiers.

We also aim to be standards compliant and follow principles of usability and universal design, which should help all visitors of this Portal.

This Portal is designed using XHTML 1.0 Transitional and meets priority 1 (level A) of the Web Content Accessibility Guidelines (WCAG) 2.0 laid down by the World Wide Web Consortium (W3C). Part of the information in the website is also made available through links to external Web sites. External Web sites are maintained by the respective departments who are responsible for making these sites accessible.

Contents of this website may not be reproduced partially or fully, without due permission from Karnataka Lokayukta.


If referred to as a part of another website, the source must be appropriately acknowledged.

The contents of this website can not be used in any misleading or objectionable context.

Karnataka Lokayukta Website does not automatically capture any specific personal information from you, (like name, phone number or e-mail address), that allows us to identify you individually.

We do not sell or share any personally identifiable information volunteered on the India Portal site to any third party (public/private). Any information provided to this Website will be protected from loss, misuse, unauthorized access or disclosure, alteration, or destruction.

We do not object to you linking directly to the information that is hosted on our site and no prior permission is required for the same.

However, we would like you to inform us about any links provided to our site.

We do not permit our pages to be loaded into frames on your site.

Our website's pages must load into a newly opened browser window of the user. 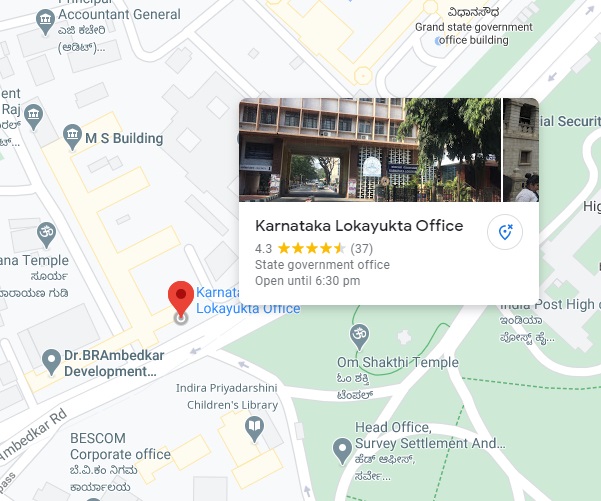